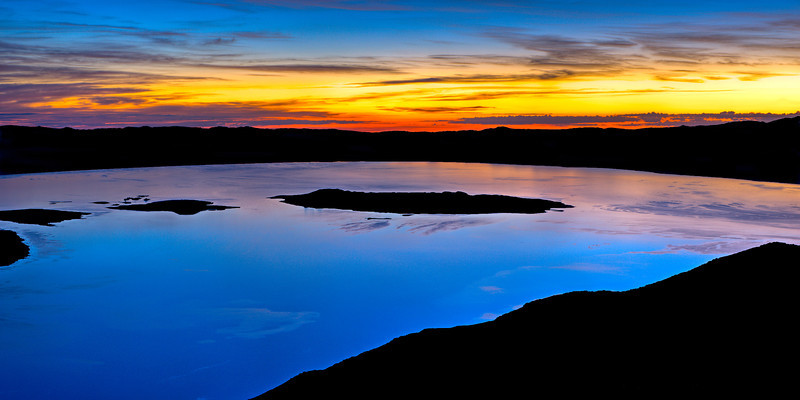 Mono Lake is one of the most photographed lakes anywhere, and for good reason. Especially alluring to photographers are its legendary sunrises and the other-worldly tufa formations. Although Mono Lake itself is quite large, the iconic tufa spires are concentrated in a very small area of the lake known simply as "south tufa". This means that 99% of photography at the lake occurs in an area not much larger than a football field. That's fine for a handful of people, but it doesn't work when vans full of workshop photographers converge on the scene.

Such had been the case this week. I was in the Eastern Sierra on a two-week photo trip, staying in Lee Vining. For three successive mornings I had gotten up well before dawn and headed to the lake. Each of those mornings 2 or 3 vans eventually arrived after me, and out poured approximately 20 photographers. Some workshops are better managed than others, but unfortunately these were those "others". Students would walk into my camera's field of view, loud conversation would take place destroying any sense of serenity, and some of the poor fools would even attempt flash photography, believing that their little electronic flashes would somehow illuminate the tufa formations 100 yards distant in the water. Sadly I have learned that a landscape photographers' worst enemy is not the wind, rain or cold, but rather fellow photographers. I loathe workshops. I understand that they serve a purpose - I really do. However, my dentist also serves a purpose, but I still don't like going to him.

After three days of this nonsense I decided to try something I'd never done before. I arose 2 hours before sunrise, got in my Xterra and drove up a four wheel drive mountain road that I had scouted out previously. It is a very steep and rough road, but I knew my Xterra could successfully negotiate it because I had driven it twice before. However, I had never done it at night. It took me just under an hour to reach my vantage point high above Lee Vining. I didn't have a spotter and my field of view was limited by the width of my headlight beams. Anything outside of the swath of light from my headlights was completely invisible. I made it to the top without incident, but there were 2 or 3 white knuckle moments that gave me more of an adrenaline boost than the hot coffee I was drinking from my thermos.

When I arrived at the edge of the vantage point it was about 6:00 in the morning. There was still no hint of dawn, but this was to be expected since sunrise was not due until 7:06. When I opened the door I was caught completely off guard as a strong gust of wind almost blew the door right out of my hands. The wind was really blowing high up on that mountain, and man was it cold! I immediately shut the door, taken back by how much worse the conditions were 3000' above Lee Vining. It was an hour before sunrise, and I was on an exposed eastern face of Lee Vining Peak at an altitude of approximately 10,000' in the middle of October. These ingredients are a sure recipe for harsh environmental conditions. At least I had the shelter of my Xterra and that wonderful hot thermos of coffee. However, eventually I would have to step outside "into my office" and get to work.

At 6:20 I could just begin to see traces of color emerging in the eastern sky. Once again I opened my door, this time prepared for the wind. Much to my delight the wind had abated, at least for the time being. It was still brutally cold though, with temperatures in the teens or low twenty's. It took me about 10 minutes to set up my gear, my pace slowed considerably by the darkness, the cold and the necessity of having to wear gloves. My metal tripod felt like a giant ice cube pulled straight out of the freezer. I made a note to myself - from now on it's carbon fiber tripods only for me.

At 6:30 the colors had grown considerably in intensity. Finally, at 6:36 the sky was on fire, so much so that it was even illuminating the surface of the lake below, even though sunrise was still 30 minutes away. I shot several images, but this one at 6:37 is my favorite. The surface of the lake appears to have taken on an iridescent quality. I had gotten what I came for.

I stayed on scene for another hour, witnessing the actual sunrise itself. As is so often the case, the dawn colors turned out to be much stronger than those at sunrise. I also derived a certain sense of satisfaction as I began to observe small flashes coming from a tiny area on the southern shore of the lake. I realized it was the workshop photographers, and I began to feel sorry for those poor souls as they busily scoured the south tufa area thousands of feet below me.