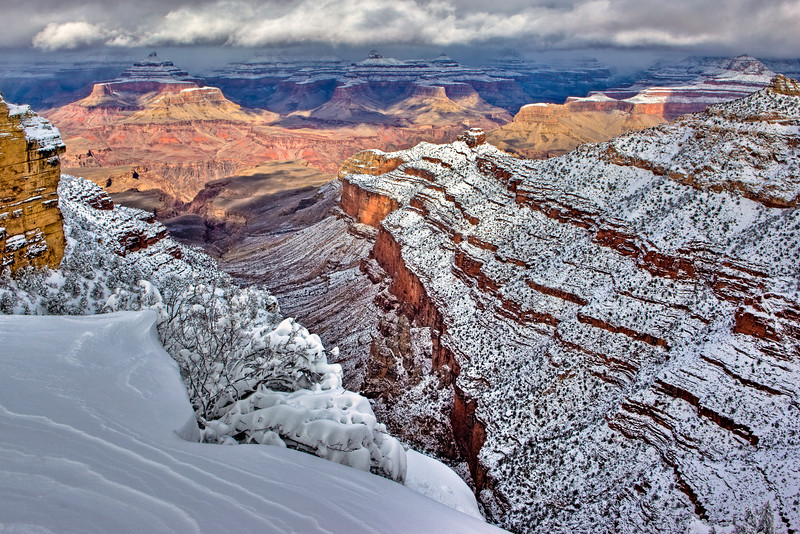 I had been closely watching the weather forecasts from my home in Southern California. It was the middle of January and three very powerful winter storms were lined up in succession and headed my way. It usually takes about a day for storms to reach the Grand Canyon after passing through my area. By all accounts, these storms had the potential to be record breakers.

Storm #1, the smallest of the three, hit my area right on cue. It dumped loads of rain on Southern California, and over a foot of snow at the Grand Canyon the following day. I packed up my truck and headed for Arizona between storms 1 and 2. Much larger storm #2 was just beginning to descend on LA when I left, so I got out just in time. I arrived at the south rim about 8 hours later and checked into my motel.

When I got up in the morning I could see that it had been snowing heavily during the night. Very heavily. I turned on the news and found out that Interstates 40 and 17 had been shut down only hours after my arrival the previous night. All roads leading into the canyon were now closed. Only the lucky few like myself who were already at the canyon could get to the rim. Of course this also meant that we could not get out. The third and largest of the three storms was due to hit in two days. It appeared as though the Grand Canyon was going to become my own private studio for the rest of the week. This is exactly what happened.

I drove to the canyon rim with the aid of 4WD and the tireless efforts of busy snowplow drivers. What amazed me was that other than the snowplows I saw only a handful of cars that day. The snow was piled up about 8 feet high on the sides of the road. Unfortunately I was only able to access a few rim overlooks - those which the plows had cleared. Even 4WD and chains could not overcome the previous night's massive snowfall. It would only get worse after the arrival of storm #3 later in the week. This was a small price to pay for the privelige of having this amazing place almost all to myself. Once again the Lord had blessed me beyond what I could ask or even think (Ephesians 3:20). I shot the image above at an unnamed roadside pullout along the edge of the rim.