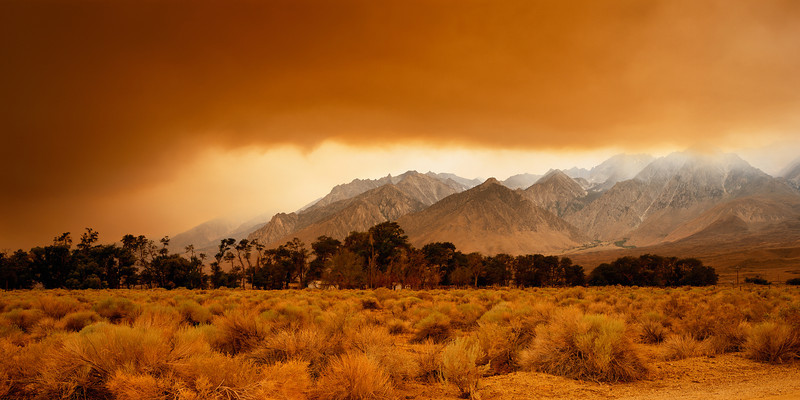 "Fire in the Sierras"

I had just finished a 2-week photo trip to the Eastern Sierra. I left my base camp in Lee Vining at about noon and drove south on Highway 395 as I headed towards my home in Southern California. When I reached Bishop I could see what I thought was smoke far ahead of me. I wasn't sure, but it appeared as though it was directly in my path. I continued south from Bishop and every minute the plume of smoke grew larger and larger in front of me. By the time I reached Big Pine at 4:00pm it was as though day had been turned into night. I'm no stranger to fires, having lived in Southern California most of my life. But this thing was a monster. I pulled over on Taboose Creek Road and set up my large format camera using a 6x12 back. The acrid smell of smoke filled the air. I began to wonder whether or not I would even be able to make it home. I wasn't sure whether or not the fire had reached the highway. Thankfully it had not.

The enormous fire, known as “The McNally Fire”, threatened the giant sequoia groves in Sequoia National Park. The fire was classified as a “type 1 incident”, indicating the highest level of national priority for fire fighting resources. The fire began on July 21, 2002 and burned for 40 days straight before finally being extinguished on August 29th. I shot this image on July 22, day 2 of the fire. The total area burned eventually exceeded an incredible 150,000 acres and was caused by a "careless use of fire" according to official reports. That carelessness cost the taxpayers of California $45 million dollars.