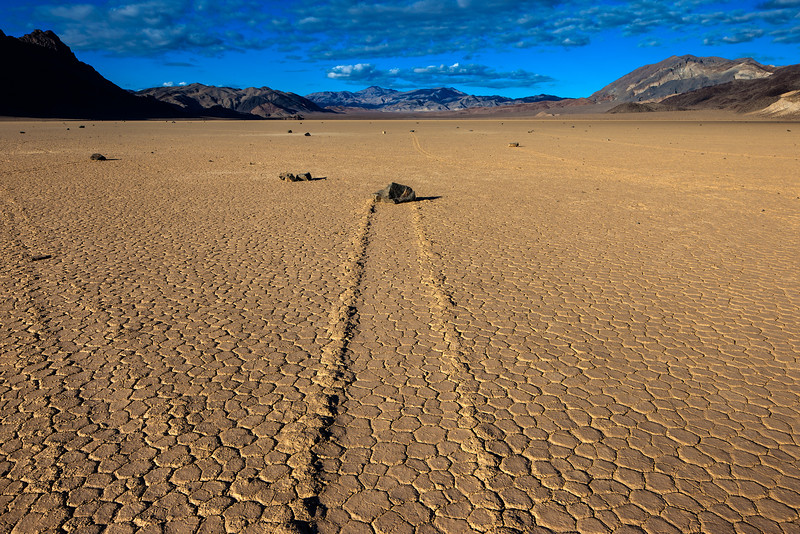 "The Racetrack and its Mysterious Moving Rocks"

Theories abound as to what propels the infamous moving rocks on the Racetrack at Death Valley. The Racetrack lies in one of the most remote sections of the enormous national park. From the park headquarters at Furnace Creek you first have to drive north for 60 miles to Ubehebe Crater. There the pavement ends, and a bone-jarring washboard road takes you the remaining 27 miles to "the track". You then hike about a mile to the very southeast corner of the playa where the rocks roam freely. If you approach with sufficient stealth you will perhaps be fortunate enough to catch a wandering boulder unawares.

As for the theories, I will present what I consider to be the three frontrunners. Some scientists think that the perfectly flat playa freezes at night after a rain. The wind then picks up and blows the boulders across the frozen surface. However, other scientists feel that this is impossible since some of the stones weigh as much as a human. Another possibility is that the Lord sends one of His angels to move the rocks like pieces on a giant chessboard, sitting back in amusement as the little humans try and explain the unexplainable. If I was God, I would do this as it would provide me with an endless amount of entertainment. Not to be left out of the fun, the folks at nearby Area 51 predictably ascribe the phenomena to extraterrestrial activity. Personally, I've got my money on the Area 51 boys.