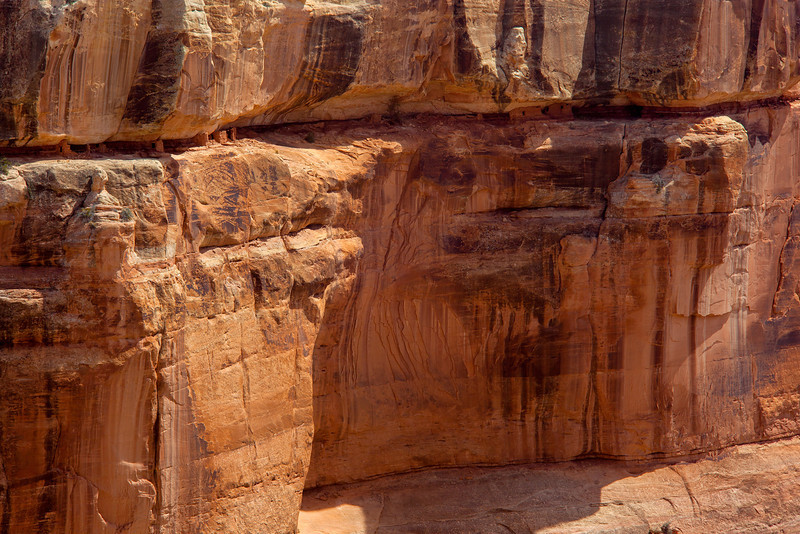 This is one of those "You've gotta be kidding me" ruins. I left my motel room in Blanding early in the morning, knowing that a long and rough drive awaited me as I headed out on one of my most ambitious ventures to date. My destination, Lewis Lodge Ruins, was 35 miles away, 22 miles of which were off-road. The last 6.9 miles were VERY off-road, requiring every inch of clearance that my 4WD Xterra could give me. Because the drive reaches an elevation of 7900 feet, snow became an issue since it was still March. Thankfully I was able to negotiate the route without chaining up. Gradually I descended past Milk Ranch Point, arriving at the trailhead 1 hour and 45 minutes after departing Blanding. I had not seen another person for at least 15 miles, so once again the solitude that I so craved was mine.

Armed with my GPS, map and compass, I set out with great anticipation in search of the ruin. I quickly realized that my GPS would be of little use as I once again found myself hiking through the deep canyons that the Anasazi were so fond of. Apparently the Anasazi were not concerned with the fact that the canyon walls would render such modern devices inoperable. "Didn't they have GPS 800 years ago" I mused. After a couple of hours of hiking it became quite apparent to me that I was lost. I was getting really tired after all of the hiking and scrambling up and down canyon walls. My fear of heights had been tested throughout this 2 week trip to Cedar Mesa, but it was in overdrive on this particular hike. Everywhere I went I would come upon a new precipice as I stared 800 feet down to the bottom of Arch Canyon.

Frustrated, I sat down and took off my heavy pack. I just HAD to be in the right location, my map and compass told me so. I had come so far and worked so hard that I didn't want to turn around and give up. I snacked on some beef jerky and licorice, welcoming the resulting spike in my energy level. I was mesmerized sitting there on the top of the canyon wall, staring out into the incomprehensibly beautiful scene that unfolded before me. The absolute silence was a joy to my senses, with only the occasional sound of wind or a distant hawk to remind me that I could still hear. Ruin or no ruin, I was in a state of bliss, as alone it seemed as was humanly possible. But where was that ruin?

After taking in the scene for a while I finally resigned myself to the fact that I just had to let this one go. No one knew where I was, and I was many miles away from the nearest person. I had pushed myself to the limits of what I deemed to be acceptable risk. As I took in one last gaze across the canyon to the sheer cliff on the other side, my eyes suddenly focused on an incredible sight, something I had inexplicably not seen until now. High up on the canyon wall, I mean HIGH up, a fissure made a deep horizontal cut into the face. Within the fissure I could see a series of ancient structures stretching out for a distance of perhaps 100 yards. My jaw literally dropped as I realized what I was looking at. I had found the ruins, and I was totally unprepared for the impact that it would have on me. "Oh my God" I said, 3 or 4 times in succession. I was at a loss to say anything else. The words that had always come so easily simply escaped me at the moment.

I setup my camera and shot several images, one of which is seen here. I then tried to figure out how to backtrack and work my way around the canyon rim so that I could hike into the ruins. After about another 45 minutes of difficult and dangerous hiking I came near to where I thought the entrance to the fissure was. By then it was getting late in the day and I was really tired. To be frank, I was also quite apprehensive about hiking into the ruins because one misstep would mean certain death. I had my beautiful wife at home waiting to hear from me during my nightly phone call, so I decided to head back to the trailhead and the relative safety of my Xterra. However, I promised myself right then and there that I would someday come back and hike into the ruins. I can't wait.