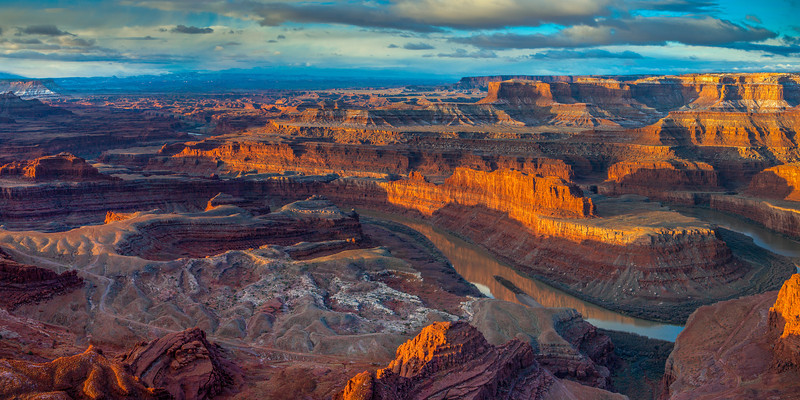 This is one of my favorite images, and one that I had been trying to capture for many years. Dead Horse Point is a small but spectacular state park located just 5 minutes from the entrance to Canyonlands National Park. Even though I took this image from Dead Horse Point, everything pictured actually lies within the boundaries of Canyonlands. Dead Horse Point is perhaps best remembered from the iconic climax to the movie "Thelma and Louise". At the end of the film Geena Davis and Susan Sarandon can be seen driving off a cliff in their Ford Thunderbird and plunging straight towards the Colorado River 1000 feet below. That memorable scene with its breathtaking backdrop was shot right here at Dead Horse Point.

This particular image had eluded me for years, but not for a lack of trying. Every time I would try for that perfect sunrise the colors just weren't there. I would always encounter a cloudless, boring sky. Clouds are a key ingredient for adding color to any sunrise or sunset. However, just as bad as no clouds is too many clouds, where the sunlight is blocked altogether. How I wish that I could control such things.

This was the second day of a two-week photography trip throughout southern Utah, and it very nearly came to an early end. As I stepped out of my truck in the pre-dawn darkness at the Dead Horse Point parking lot, I put on my headlamp, donned my heavy backpack and began the short hike to the lookout. I hadn't walked 10 feet before I stepped right in the middle of an invisible ice patch. Both feet slipped completely out from under me and my pack was only making matters worse as I began to fall backwards. Amazingly, I regained my balance even though both feet were literally airborne. I have no doubt that the Lord once again saved me from harm as He had done so many times before. Thank God for His mercy and protection!

I continued on to the viewpoint, now much more cautious about every step taken. The ice is hard enough to see in daylight, let alone at night. When I reached the overlook the wind was merciless because on the rim of the canyon there is simply nothing to abate its power. Man was it cold. I was forced to take off my gloves to set up my gear, and my fingers were none too happy about it. Once the first glimmers of dawn began to appear in the east (to my left), I could see that the sky was filled with gorgeous, but as yet colorless clouds. These wind-formed clouds were just what I was looking for. Slowly the sun began to make its appearance, and as it did the clouds and the mesa tops below me began to light up with a heavenly splendor. I was all alone witnessing one of the most spectacular sunrises I had ever seen. Patience and hard work had finally paid off.