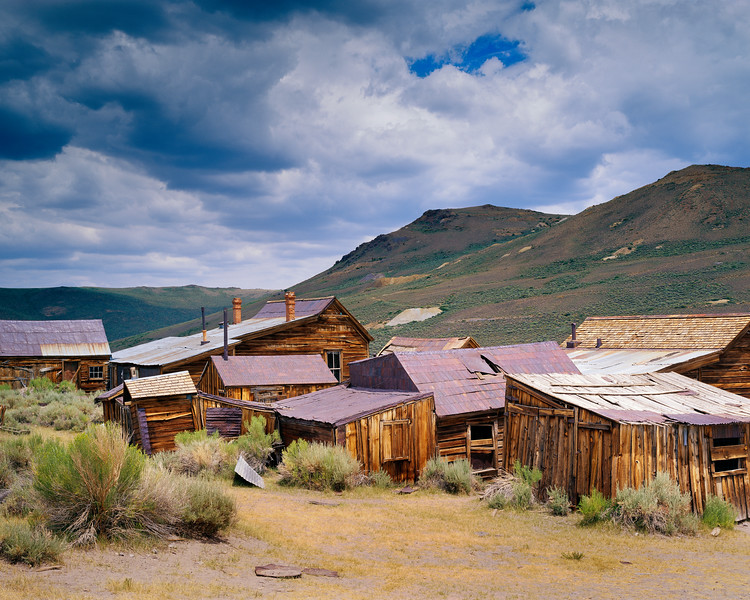 This image shows the home (and surrounding sheds) of Patrick Reddy, a criminal attorney who settled in Bodie in 1879. Adding drama to the scene are the ominous storm clouds which photographers so covet. I shot this image in July, the beginning of the Eastern Sierra monsoon season. This day was showing great promise as storm clouds began to form in the early afternoon, fueled by the rising temperature. I carefully set up my 4x5 rig and composed my shot. I could hear rumblings of thunder off in the distance, but nothing in the immediate vicinity. An occasional raindrop would land around me, but again nothing alarming.

Like most 4x5 shooters, I was completely immersed in the picture-taking process under the dark cloth. My mind was busily trying to run down my technical checklist to make sure that I had not overlooked any detail. I fired off a couple of rounds, and then it began to rain - hard. I lifted the dark cloth off of my head. Just as I did I saw a flash of lightning followed a split-second later by an ear-splitting clap of thunder. I looked around and noticed that the town which had been so full of tourists was suddenly vacant.

I began to question the wisdom of standing out in the open next to a ten-pound metal tripod in the middle of a thunderstorm. "Not smart" I thought, and I grabbed my gear as quickly as I could and ran for cover. Just as I did all "hail" broke loose. I was getting hammered by marble-sized hail. You are not allowed to enter Bodie's buildings so the only remedy at my disposal was to lean up as close to a building wall as possible. It really didn't help much other than to abate the wind which had come up out of nowhere.

About 3 or 4 minutes later the storm left as quickly as it had come. The only sign that it had ever been there was the ground covered in hail and pools of water. Oh yeah - there was also at least one very wet photographer roaming the now muddy streets.